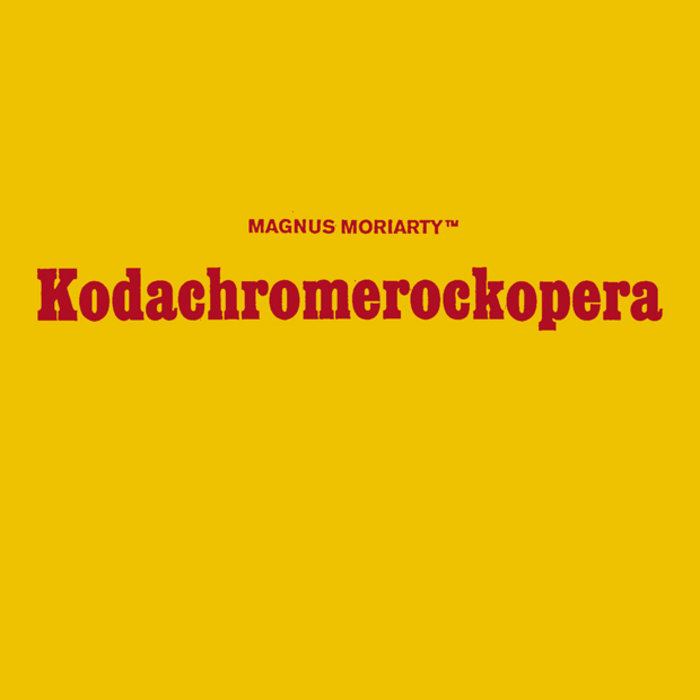 “Kodachrome was invented by Leopald Mannes and Leopold Godowsky, sons of well-known musicians by those names; they themselves are musicians”. So states the peculiar linernotes to Magnus Moriarty™’s most recent long player, Kodachromerockopera. Accompanying the record are two printed photographs, one picturing the inventors of the now defunct photographic film in their lab, another picturing the duo that makes up Magnus Moriarty™ in identical position as in the former photograph. The duo consists of songwriter, musician and singer Magnus and his sidekick and multi-instrumentalist, Ergo, both from Oslo, Norway. Little is known of their, or the album’s, direct connection to the Kodachrome brand, much less other similarities between the duo and the two Leopolds. Magnus and Marius are not sons of well-known musicians, but in fact sons of greengrocers and librarians. They themselves are, however, musicians.

Kodachromerockopera has the air of a dramatic concept album, even though its creators insist it is not one. The album is filled with ever so subtly psychedelic pop tunes about Tycho Brahe, lovely Copenhagen autumn days, holes in the sky and futuristic laments for our doomed planet, where whales escape into outer space and humans are left behind to revel in plastic and junk. The lyrics seem to revolve around a world which may or may not be parallel to ours, where self-destruction is near, or even already upon us, but the sun is still shining gayly. Cynical romanticism and optimistic bleakness adjoined.

The sound of Kodachromerockopera is decidedly British. No doubt Magnus Moriarty™ takes his scones with a healthy dose of marmite and a cup of tea on the side. Why this Britishness from a scruffy scandinavian pop band? At times it sounds as if Magnus Moriarty™ had his musical upbringing in an isolated British cultural colony in the cold north, where the biscuits are dry, The Young Ones is elevated to a state of highest religion, and the music of Henry Purcell is the customary background noise come tea-time. The sounds of british sixties pop and psychedelia are lurking in the background throughout, without it ever becoming “retro” or sentimentally nostalgic. All this contrafactional Britishness and unassuming referencing to the past is taken for a good spin in a tumbler of indie-pop, classical and prog influences, making Kodachromerockopera come out of the drier with a decidedly unique and unmistakable sound. English tea and B-sides, anyone?

Like the color reversal film it takes its name from, Kodachromerockopera will be appreciated for its vividly colorful images, complex processing requirements, and – if there are holes in the sky and the world is indeed coming to an end – its dark-storage longevity.